Save up to $100 on Ascend Kayaks at Bass Pro Shops 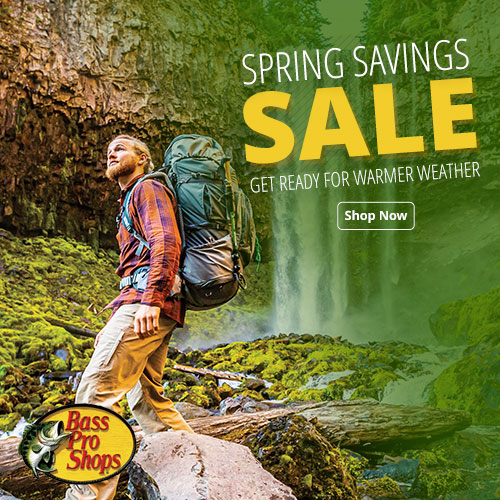 Take your dog on a beautiful hike this Walking the Dog Day. Shop Hiking Gear at Bass Pro Shops.

Best fishing in the springtime

When you talk about fishing in the spring you must consider if it is early spring or late. In the early spring the crappie start heading towards shore. The trout are biting in the muddy rivers, the smallmouths are eating good in the lakes and so forth. You might want to think about getting ready to hit the waters as soon as March.

In early spring fishing the rivers are good for pike,bass,trout and crappies as well as walleyes. You know you are ready as winter slowly fades away. We have spent the winter months stocking our tackle. We have been thinking of where we will go first. Lets go to the river first and do some trout fishing. When the river is full and flooded it tends to lead us to where the flooded water heads back to the main flow. This is a good spot to catch trout.

Its a good place for the trout to let the flow of water bring the baitfish and worms right into their area. Easy pickings for them at that point. Feeding time for the hungry fish. Therefore it is a good feeding time for us after we land them. Go here to check out a delicious trout recipe.

Most fisherman like to use this trip to fly fish for the trout. After all winter being cooped up inside it is very good exercise also. But its not the only way, you can use other methods as well. It is no surprise that they are hungry after being out in the deeper water all winter. Now they are moving towards the shallower warmer water.

This is one of my most favorite fish to fish for. Challenging and clever fish is this one! Part of the challenge is finding these clever devils. The clearer the water the better. they like to hide around rocks and wood structures. a good fish finder comes in handy. In early spring they can find baitfish around these spots as well.

You will want to use a lure that is noisy and very noticeable to the fish. Try to make your lure hit on rocks and such as to get their attention. you might have to experiment with weights and different jigs also. believe me this early spring bass fishing can be very rewarding. as the weather gets hotter they get craftier and not as hungry.

The smallmouth bass is another fish you can have fun catching in the early spring. This fish is at their heaviest in early spring. The water temperature is around 40  degrees and a lot of fisherman think its tougher to catch them. Not true, they can be plentiful again because they are hungry after a long winter. Therefore you can catch quite a bunch of these yummy fish.

A pro fisherman named John Blais from Maine has been fishing for smallmouth for 30 plus years. He recommends a Silver Buddy Blade bait. Similar types are available which you can acquire here. A good place to find the smallmouth is around steep drop offs. These bass will spawn there as the water temperature warms up. You should have good luck there.

For the walleye in early spring we travel back to the river. They are usually found around dams that have been pounded and have slack holes below. A lure that stands out in color like a Rapala minnow or other bright colored heavier lipped lure as to dig in the current better. focusing on smaller creeks and slower currents is a wonderful place to find the holding up. The walleye can get to be quite large and is a monster to catch.

Back home in Ohio where I grew up and learned fishing the walleye is easily found in rivers and dams. The spillways seemed better than the dam itself. Live bait works pretty good at catching these fish, like minnows and night crawlers. They like to feed near dusk and dawn. You will find them mostly in deep water 15 feet and deeper.

You may be interested to know that a female walleye that is about 10 years old will be around 25 inches long. It isn’t uncommon for them to be of that size. you can be assured if they are that big that you will have a pretty good fight on your hands. The smaller younger fish won’t fight near as much.

Now if you didn’t know the northern pike has teeth.

Overview:Historically, Northern pike were abundant in Lake Erie and its tributaries, especially in the extensive bays and marshes of the western basin. It is also thought to have been present in some tributaries of the Ohio River.

As far as the states where you can find pike there are many. They range from Maine to Kansas to new Jersey to Minnesota and very many more.

Northern pike prefer clear water with dense cover in the form of aquatic vegetation or logs and tree limbs. Historically, Northern pike were more abundant than they are today but they are still found in the western basin of Lake Erie including Sandusky Bay, Maumee Bay, and the remaining marshlands. Northern pike can also be found in tributaries to Lake Erie in late winter or early spring during their spawning migration.

There are also small populations in many of Ohio’s larger river systems. Some good streams to fish for pike include the Cuyahoga River, upper Scioto River, St. Joseph River, Tiffin River, Portage River, and Killbuck Creek. They feed heavily on fish, but will take nearly anything they can fit in their mouth, including frogs, muskrats, and small ducks.

I am emphasizing Ohio because that is my home state even though I reside in South Carolina now. Just thought you might be wondering.

The Northern pike is a long and slender fish with a duckbill shaped mouth and lots of needle sharp teeth. The dorsal fin is soft. It is located near the tail fin. In contrast to the muskellunge, the lower half of the gill cover does not have scales while the cheek is fully scaled. Northern pike also have numerous white or yellow spots on their sides with a dark green or olive background body coloration.

They also have dark spots or wavy lines on their fins. Muskellunge have dark colored markings on a lighter background. A member of the  pikes family, this sport fish is also known as hammer handles.

Adults are typically 20-30 inches and 2-10 pounds, but they can reach 48 inches and 25 pounds. In general, females are larger than males. Probably more dominant too. Just kidding folks. All pikes are the most aggressive in our fishing waters.

Spring’s a productive time to fish crappie. These panfish stack-up on predictable spots and are often willing biters. Immediately following winter you’ll find crappie in and around protected, shallow water. These zones are abundant with forage, and crappie will feed heartily for several weeks until the water’s warm enough for spawning. Spawning occurs between late spring and early summer. Figuring out early-season crappie relies on the rule of real-estate: location, location, location. And when talking paper mouths in spring, this means fishing the coves,canals,and creeks.

Well that brings us to the end of another informative post on early spring fishing.

April is National Month of Hope. Let's get some perspective outdoors with gear from Bass Pro Shops.